Google finally released the XE9 factory images, and resident teardown guru Fodawim has once again made quick work of dissecting the changes. While much of the changes were heavily geared towards maintenance (with the total image being reduced by over 20Mb), there were several other notable changes, including no longer needing the wifi hotspot and the presence of a new photo and video API.

New functions present in this image include Posting (with multiple destinations, “post an update to”), listening tasks for the media player, and enhanced note-taking ability. 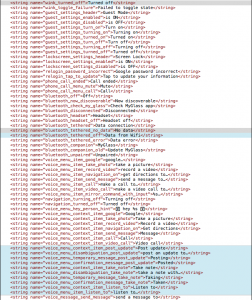 GlassSearch.apk has been added to the package, GlassPeople.apk removed, and a “bar hopper” library has been added for barcode reading.  Additionally, new functions referencing “boutique” have appeared, likely related to native glassware in the consumer edition:

These seem to indicate coming enhancements in hardware access by the Mirror API, which should open up new development opportunities for apps on Glass.

Spotted anything else in your own XE9 teardowns? Let us know in the comments.