Did I tell you the one about the two philosophers who wanted to build a Massively Multiplayer Online Augmented Reality Simulation (MMOARS) for Google Glass? It turns out they Kant code. Bad puns aside, Daniel Estrada and Jon Lawhead want to do exactly that, and their idea is no joke. Swarm takes years of study in complexity theory and herd behavior and gamifies it:

“In Swarm!, you play an individual and working to expand your own colony and defend it against rival colonies.”

“As you walk around your neighborhood, commute to work, or meet a friend for lunch downtown, you automatically collect resources and leave Trails that mark the environment with the color of your colony. Crossing trails left by another and can signal the location of useful resources, colony members in need, or rival colonies encroaching on your territory. A direct encounter with another ant from your colony might more evenly distribute your resources for the colony’s benefit, but an encounter with an ant from a different colony might result in a fight that leaves you without any food at all.  Your ant will get stronger as you play the game, and you (along with your colony) will be able to claim territory around the city.”

Judging by the number of Ingress players out there, games designed to get you off the couch and out into the real world have the potential to be wildly popular. Unlike Ingress, however, Swarm! will use your every day travels as part of the game mechanic, as opposed to limited interactions only happening at fixed locations.

While the basic game idea is pretty simple, the theory underlying it is anything but. Daniel and Jon have a serious background in these kinds of systems. As an undergrad at Berkeley, Jon became interested in emerging consciousness, and how the social system evolved without any apparent external mechanism. After reading Herbert Simon’s “The Architecture of Complexity“, he became inspired by the question of how seemingly unrelated elements could form complex interactions; the organization of the internet at large is one such example.

Daniel came from the opposite direction; his focus being artificial intelligence and machine learning, he’s skeptical about the very existence of a higher “human consciousness”, and has defended the Turing Test as a measure of intelligence. He’s also done an extensive study of real-world swarm behavior, especially in ants, and the application of those observations to the design of practical structures and the improvement of social institutions.

Their opposite perspectives led to balanced collaboration, and a unified goal:  to leverage something like the mechanics behind Swarm! as the basis for an experimental approach to solving a cluster of optimization problems in economics:

“One of the big problems (maybe the big problem) in economics is the problem of how to best distribute resources–that includes raw materials, but also stuff like labor and management time–such that productivity is maximized and everyone benefits.  There have been a lot of different approaches tried over the years.  The Soviets and their followers tried to solve this problem by a kind of centralized computation: they wanted all the data about what resources were available to come into a single place, and then have a couple of people compute the best things to do with those resources.  That didn’t work out too well, and there are proofs floating around out there now that show why it never could work out well, at least without something really unexpected like the Technological Singularity happening.  There’s just too much data to crunch in doing these calculations, and by the time you’ve got a solution, the situation has changed so much that your solution isn’t valid anymore.”

“So the recent solution has been to distribute that calculation rather than centralize it: you end up with lots of individual nodes (consumers and firms) doing simpler calculations with much less data, and then acting in their own self-interest in the context of a shared marketplace.”

“Distribution is the key: if you can break a big problem up into smaller problems and then arrange a system so that the  big nasty complicated computation is carried out by all the simpler nodes going about their business in the context of the bigger system, then you can actually solve some of these nasty problems more quickly.  A lot of scientific projects have hit on this: projects like BOINC use distributed computing to solve lots of computationally-intensive problems like how to fold proteins or how to find signals in a huge data set of noise.”

“The idea we’ve been working on is to bring something similar to economic planning.  We’re calling it the #attentioneconomy   approach to solving these problems.”

“The basic idea is to take the best of both worlds from market capitalism and a planned economy: we want to explore distributed planning.  This requires access to a lot of information about human behavior that was never available before, but that is becoming available thanks to digital technology (and which might be presentable thanks to augmented reality technology).  We think that there’s a way to use attention and use-behavior as a proxy for value, and to leverage a lot of that data into a distributed planning framework for economic success.” 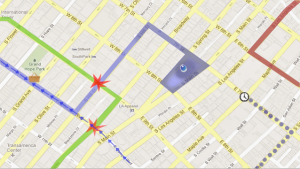 So far, the game only exists in the mockups and game bible that the two have created. While both have are strong in the underlying mechanics and game theory, both are admittedly not coders:

“Neither of us is particularly strong programmers, so we’re very interested in recruiting on this front and working with software developers on the choice of languages and environments.”

“We’re interested in possibly expanding the game to other mobile platforms eventually, and have talked about developing the engine to accommodate significant expansions in the future, so someone who could code with that in mind would be ideal.  We’re also very interested in open source development and collaboration, and hope to eventually release Swarm! with the GNU General Public License.”

Towards that end, they’re holding a Hangout on Wednesday, May 22nd at 9 PM EST to answer questions about the concept and material, solicit feedback, and to attract collaborators. They’re also hoping to attract funding from the Glass Collective fund being offered by Google Ventures.